This is the second article on Nara Visa residents’ concerns over a nuclear waste research project taking place in their backyards. The first article can be found here.

The Canadian River Municipal Water Authority supplies over ½ million people with water that comes from the Canadian River. Needless to say, we are VERY concerned about the prospect of high level nuclear waste being disposed of in our water shed…. [a]lso, the Canadian River is a tributary to the Arkansas River, then the Mississippi, and finally the Gulf of Mexico. The magnitude of this issue is obvious.

Not only is our water shed and the Canadian River a concern for us, but the Ogallala Aquifer is as well. It is the dominate aquifer in this area. The wrong combination of events could conceivably contaminate it also.

DOE, by its own admission, has billions of dollars of infrastructure maintenance backlogs because of the lack of planning and funding for life cycle costs. Many government agencies, such as the DOE, are not adequately funded. This means corners must and will be cut and with a project like this, a cut corner could be catastrophic for a long, long, time.

The CRMWA closed their letter by giving their recommendation to Commission:

We believe this project should go back to Yucca Mountain where the science has been completed and is on government owned and controlled land.  In closing, the Canadian River Municipal Water Authority strongly opposes this project and would be happy to supply a more in depth response on this issue if needed.”

Quay County residents are also disputing the over-all economic and educational benefits touted by Peter Mast, President of Enercon Federal Services. According to the recorded minutes of an October 2016 Quay County Commission meeting, Mast anticipated “the project to require 20 employees off and on with the possibility of 6-12 permanent positions.” ENERCON representatives have also mentioned the overall benefits of bringing a 40 million dollar contract to the area.

“Virtually no materials or equipment is going to come from Quay County so no tax revenue from sales.  Income tax from any jobs will go to the state, not county.  Gross receipts taxes, after giving the state their cut, would give the county a tax income of $100,000 per year over 5 years.  Worth a nuclear dump?”

“These contractors have all the management positions filled by out of state professionals taking their wealth with them when they go.”

After reviewing Wyatt’s claims, I reviewed ENERCON’s website regarding its construction of nuclear site characterization and the work appears to be highly specialized, meaning local job creation is unlikely.

“How is trading Quay county’s base economy of farming, ranching, and real estate for a polluting economy going to benefit this community long term?”

Patty Hughs’ concerns are worth noting when looking at agriculture statistics from the USDA and New Mexico Department of Agriculture. In 2012, the market value of agricultural products sold out of Quay County topped $36,700,000. 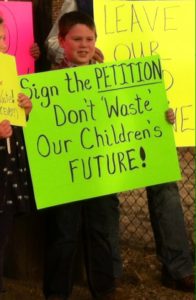 To be sure, many legitimate questions arise on what would happen to farm and ranch land values, and to the agricultural community’s ability to protect their way of lives if nuclear waste storage becomes a reality.

Would banks change lending practices to farmers and ranchers because of the attendant risks of nuclear waste storage? Would real estate values be decimated? Would insurance companies even cover agricultural operations where radiation exposure would render the land unusable for a thousand years?

In the short term, its conceivable that restaurants and other local businesses could see a small bump in revenue from out-of-state drillers. But long term? They may stand to lose the base economy that has kept their doors open for years.

One thing is for certain, an all important meeting for residents will take place with the Quay County Commission in Tucumcari February 13th, 2017 at 9 a.m. to potentially decide the fate of ENERCON’s drilling operation. The majority of residents that have spoken with the New Mexico Politico are hoping and praying the Commission will rescind Resolution No. 27.

The New Mexico Politico will report on the Commission’s decision tomorrow.

Disclosure: My wife is related to the owners and operators of the Hat T Ranch in Nara Visa. The image of the church in Nara Vista used in the story is courtesy of Connie Payne.

David K. Clements, J.D., is a professor of business law at NMSU, and serves as a trial consultant for civil litigation firms. Prior to working as a professor, David was a violent crimes prosecutor supervising the Lincoln County district attorney’s office. He has tried well over 130 cases to a jury, ranging from 1st degree murder to defending municipalities. His previous experience includes working as a business attorney for southern New Mexico’s largest law firm. David’s political experience in grassroots organization led to him being elected as a national presidential delegate, Republican Party county chairman, and appointment as NM State Chairman for the Johnson-Weld Presidential ticket. David ran for the U.S. Senate in 2014 as the liberty option, rallying a unique coalition of pan-conservatives, constitutionalists, libertarians, and disenfranchised Kennedy democrats. His opinions are his own, and may not reflect those of the regents or administration of NMSU, his clients, or colleagues.
2020 Elections, News, NM Legislature, Political Strategy