With Election Day right around the corner the 2018 election cycle will begin to noticeably ramp up from the post-primary lull. In some of the more interesting or competitive races this year, there are some dynamics at play that will have a large impact on the final results in November.

As campaigns across the state kick into high gear, here are three things to keep an eye on as the New Mexico general election gets under way:

It is well understood that the minority party in power in Washington traditionally has a voter enthusiasm advantage in midterm elections, and this year is no exception. But the enthusiasm gap seems to be even bigger than the historical average. In New Mexico, there was a glimpse of this in CD-1’s competitive Democratic primary where there was a 23.9% increase in turnout from 2012, the last election when it was an open seat (even when considering 2012 was a Presidential election year with a different political environment the increase is notable). Compare this to the state’s last Republican bastion, CD-2, where a competitive Republican primary last month actually saw a decrease of 16% in turnout from 2010, the most recently contested Republican primary election. Obviously voter enthusiasm from the “Tea Party” wave that year was fairly unique but the difference in Republican voter turnout is noteworthy.

Nationally, the Democrats’ lead in the generic ballot has more than doubled since the beginning of last month and their fundraising numbers have been equally strong (more on that later).

Clearly, the concern for Republicans is twofold: Democrat turnout is up and Republicans are staying home. Unless the New Mexico GOP spends some time and resources on GOTV, the results in November could get ugly.

Make no mistake, the Trump base is as solidified as ever and the groups that make up his core supporters – rural voters, Republicans, white men, and white men without a college degree – have and will continue to support President Trump and candidates that embrace him.

But the demographics of New Mexico, including its status as a Hispanic majority state, require that in order for a Republican to win he or she must play to the center or at the minimum center right. Congresswoman Michelle Lujan Grisham is well aware that New Mexicans prefer moderate general election candidates as evidenced by her Albuquerque Journal interview where she calls herself a “fiscal conservative” and rejects those on the far left who want to abolish ICE (undoubtedly she does not want Pearce to pigeonhole her as an open borders, out-of-touch progressive).

However, Hispanic voters are not a monolithic voting bloc driven solely by immigration policies. Trump’s approval rating increase last month was actually due in part to a 10 point climb among Hispanic voters.  Evidently it is easy to forget that bread-and-butter, kitchen table issues focused on economic prosperity are a strong motivator for all voters, including Hispanics. If economic indicators maintain their positivity (which could be threatened by the anxiety surrounding Trump’s trade war), then Republicans’ support would be maintained or strengthened and Democrats would miss out on a valuable talking point. So far the signs are encouraging for Republicans: the economy grew at its strongest pace in nearly four years and surged 4.1% the second quarter of this year.

Although the strength of the economy is probably the most beneficial outcome Trump can rightfully claim credit for, the hysteria regarding border enforcement (as well as the relentless and sometimes unfair media coverage) plays right into the Democrat’s playbook and any Democrat running for office in New Mexico hopes that the issue stays in the headlines, ensuring the Democratic base’s enthusiasm does not subside (side note: our immigration system has been broken for a long time, but that is a topic for another day).

On Thursday House Majority Leader Kevin McCarthy met with House Republicans before they left Washington for a five-week recess, sounding the alarm and telling them that they need to make up ground if they are to maintain control of the House. McCarthy informed them that the constituencies most at risk of turning away from Republican candidates are women and independent voters, both key constituencies for campaigns in New Mexico. The reason? Trump. With women in particular the disconnect between them and the President is bad and not getting better:  among men Trump’s approval rating is 54% positive and 45% negative; among women it’s 32% positive and 65% negative.

In CD-2, Yvette Herrell had to embrace Trump “bigly” in order to defeat Monty Newman in a bitterly fought primary election. Though it remains to be seen what long term effect that will have in the general (keep in mind that even though Congressman Pearce embraced the Trump tax cuts, he publically opposed the border wall) you can bet Democratic candidate Xochitl Torres Small will happily remind voters of that embrace. Unfortunately for Torres Small, Hispanic turnout tends to plummet in midterm elections, so being able to break that trend is a key part of a winning strategy for her campaign.

Republicans are facing not only a surge in Democratic voter enthusiasm but in fundraising as well. In fact, the fundraising surge by some Democratic Congressional candidates is such that they are actually outraising their Senate counterparts, something that is very unusual.

In CD-2, Democrat Xochitl Torres Small more than doubled her pre-primary cash on hand: as of the last reporting period, she has an almost 5-to-1 cash advantage over Yvette Herrell. Even though Herrell had a very competitive primary election and Torres Small did not, it is impressive for a relative political newcomer to raise such sums of money (yet as Editor-In-Chief Aaron Henry Diaz recently mentioned, calling Torres Small a political newcomer is somewhat of a misnomer). 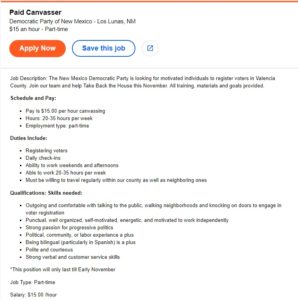 Nationally, Republicans are starting to get the message. As part of that aforementioned meeting of House Republicans with Majority Leader Kevin McCarthy, it was announced that the RNC, the NRCC, and the NRSC will tap into their considerable cash reserves (the RNC has outraised its Democratic counterpart almost two-to-one recently) to assist 100 Republican candidates running in House and Senate races. One can reasonably anticipate Herrell will receive some form of outside assistance, especially given that the DCCC has had a sophisticated GOTV effort underway in CD-2 for some time. New Mexico Democrats continue to aggressively expand their GOTV operations and Republicans so far have been playing catch up. Gary Johnson’s anticipated Senate bid is likely to produce at least a measurable increase in voter turnout since it will bring new energy and attention to an otherwise sleeper of a Senate race, but besides making it practically impossible for Mick Rich to pull off an upset and forcing Heinrich to make a little more of an effort (as well as the potential return of the #FeelTheJohnson hashtag), it’s difficult to foresee how his nascent campaign will affect the rest of the November ballot.

Outside money groups will unquestionably have an impact in New Mexico but the degree of their impact remains to be seen. Already, the focus on GOTV by out-of-state and in-state Democratic groups should give Republicans cause for concern since the path to victory for Republicans in New Mexico requires not only support from independent and moderate Democrats, but turnout from as many registered Republicans as possible.

The collective GOTV performance in CD-2 (or lack thereof) by Herrell and Pearce, as well as groups friendly to them, will have a significant impact on the makeup of the Roundhouse come January since a large number of the most competitive legislative races are clustered in the district. While it is almost assured Republicans will lose seats in Santa Fe this cycle, the final tally will be largely impacted by the success or failure by campaigns in southern New Mexico. And with redistricting on the horizon, there is a lot at stake.

Dax is a contributor for The New Mexico Politico. He has a BBA and MS from New Mexico State University with a professional background in systems engineering, energy marketing, and political strategy.
2020 Elections, News, NM Legislature, Political Strategy