July Goes to the Dems, But Trend Away From “Big 2” Continues

It has been coming for some time now.  The rise in voters who choose to be unaffiliated/independent (DTS in our state) has been on the move for a few decades.  This year, the numbers are large enough to make them the second largest block in seven counties and on the edge of overtaking either Ds or Rs in eight more counties.  Out of our thirty-three, that amounts to nearly half the counties in our state where Independent/Other registrants can have a bigger impact.  The charts below will show you the June to July changes and the last column shows the year-to-date (YTD) change since December of 2017.  Here is the breakdown:

Since the end of last year, the Independent/Other group of registered voters has grown the largest as a percent of registration share.  Libertarians have been advancing as well. Conversely, the Democrats and Republicans are losing share.  When broken down by county, the real story happens.  Republicans are losing share in 15 of 33 counties. Democrats are losing share in 24 of 33.  For Democrats, the only thing saving the slide is decent registration performances in some of the biggest counties.  Outside of those though, the story gets bleak fast.  Democrats losing in rural areas, but Republicans are gaining only where population mainly is shrinking.  Both big parties have their own unique challenges ahead.

Where are Republicans hurting?  Only in the two biggest counties in the state which account for just over 40% of the state’s vote.  Swimming upstream to that can be daunting. Basically, for every percent you lose in Bernalillo and Doña Ana, you’ll have to gain four or more percent in a collection of smaller counties to keep up.  Republicans are stronger in counties with a higher average age.  And while older people vote more, they also die more.  Replenishment does not seem to be keeping pace currently.  Not only that, but the independent surge in Doña Ana county has overtaken the number of registered Republicans.  It happened sometime in March and the gap keeps widening.  Besides Doña Ana county, Republicans are now in third place in McKinley, Rio Arriba, San Miguel, Santa Fe, and Taos counties.  Without a younger more urbane message, the Republicans are in danger of slowly fading away in relevancy. And while Democrats decline in the rural areas, it is independents, not Republicans that surge much more. 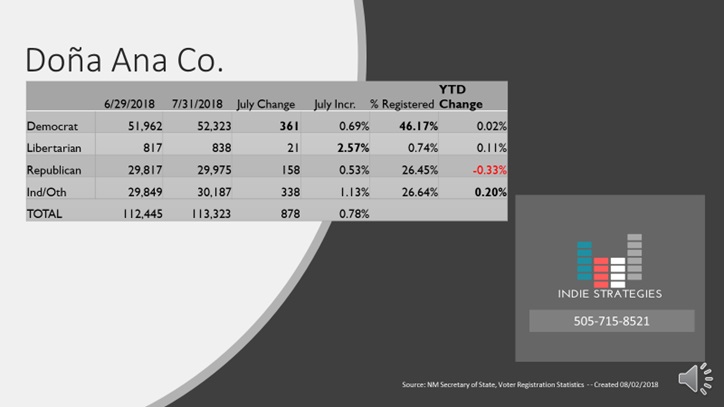 As usual, the Democratic challenge is more complex.  As in many states, the Democratic Party is not one single unified party.  It is rather a conglomeration of various communities of interest.  Their wingspan covers Wall St. on one end, and the unloved colonias on the other, with a heaping helping of urban, labor, environmental, and government interests tied together with bailing wire and platitudes about the future, or in lieu of that, #resistance.  Unwieldy at best, the new internet age has stretched its loose bonds to the limit.  Party talking points and a myriad of independent news sources are revealing the divide.  So, while Republicans falter in the areas of greatest digital penetration, it is not the Democrats reaping the rewards, it is the independents.  Young registrants are signing up with no party at the at rate approaching 40% at times.  The slide above shows this.  Also, below, in Bernalillo County, the momentary gains of July can only barely bring to keeping pace.  Most other months have not been so fortuitous. 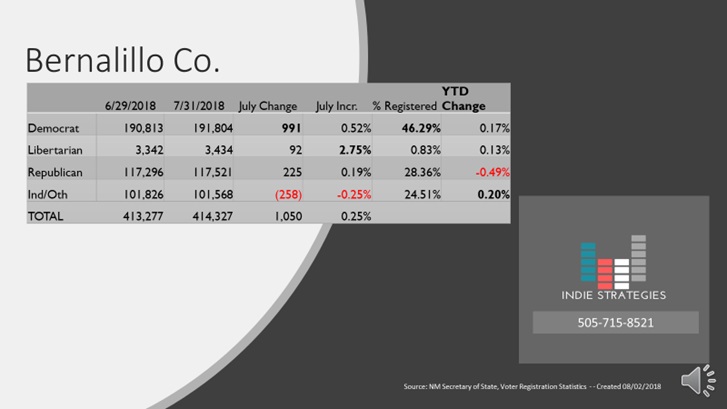 Obtaining major party status after the 9% showing of Gary Johnson in the Presidential race, the Libertarians have now the unenviable task of rushing into the deep seas of Major Party Status.  Starting small, their registration numbers are good compared to their size.  Finding the perseverance, among a small crowd, to sustain the energy will be their challenge.  The Greens faltered after a brief contact with such status.  The big parties, especially the Democrats, moved to crush the upswing. Will such happen again this time from Republicans?  It is exciting to watch something new connect with the public.

So, in the seven counties where independents have second place in registration, can there be a new genesis? It is still new but more plausible than ever.  Whether they run for office or not, independents play a bigger role every election cycle.  I look to the land of the big brains in New Mexico, Los Alamos county.  Looking at their registration figures gives me a glimpse into the future.  No major party over 40% in registration and independents adding to the rolls as fast as the biggest party. 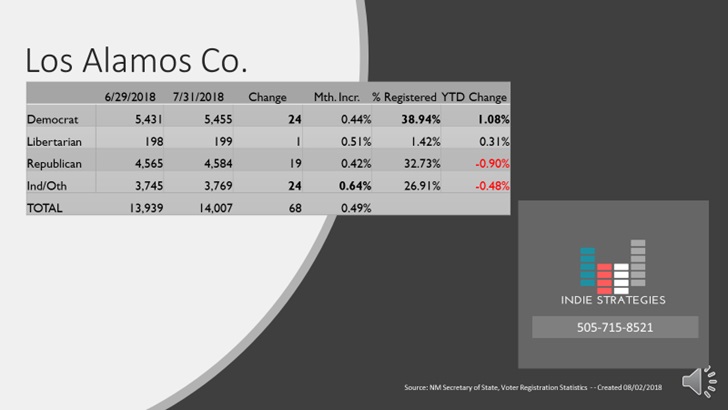 For a complete look at the 33-county breakdown with audio commentary, go to my Vimeo page at: vimeo.com/282947676

Steve Cabiedes has lived in Albuquerque for over forty years. He is the owner of Indie Strategies, a Political Consulting firm. Steve's journey has taken him to connect with people of many political philosophies. Steve lives with a passion for Geography, Music, Politics, Integrity, and Truth Telling.
2020 Elections, News, NM Legislature

Key Takeaways from the 2019 New Mexico… 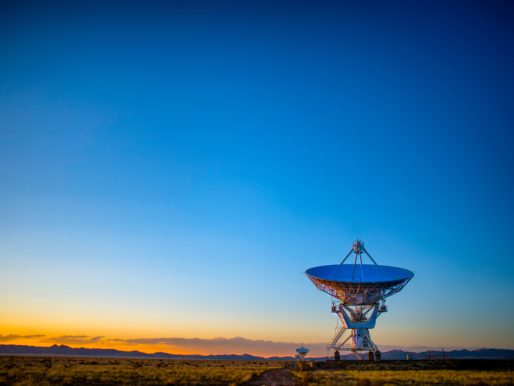