Independent and other party voter registration in the month of August posted more raw registration net gain than all the three major parties put together. Not to be outdone, the Libertarians post another month over month growth rate over two percent.  Over all, this action is what I call the default scenario. When the two big parties are not actively registering people to vote, they lose small amounts of share of the registered voter pie.  In late August, the Democrats officially fell below the 46% mark.  Republicans are getting closer to falling under the 30% mark. 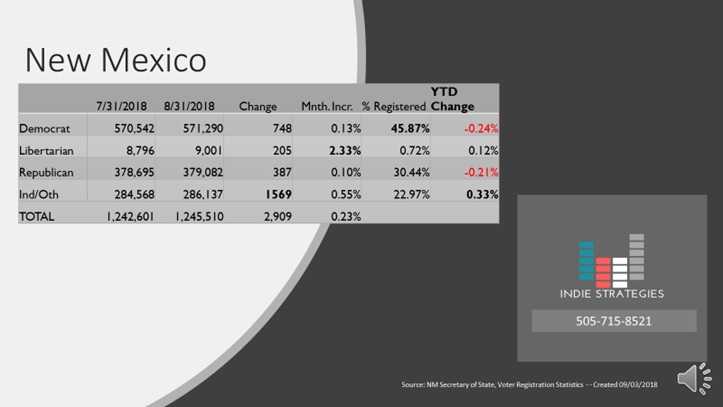 Neither of the “Big Two” parties are winning or losing uniformly.  The Republican Party, while growing at less than half the average rate, is making gains around the state. Most of these gains are from counties east of the Rio Grande, with the exceptions of San Juan and Rio Arriba.  Democrats are bleeding out all over the state.  The best news for them is they are holding their own in some bigger counties and making gains in Sandoval county, which is large.  Libertarians are on fire. They posted another two percent plus monthly growth rate for the whole state.  The growth was had in counties of all classification. Their August growth rate was a bit higher than July. Gary Johnson’s entry to the US Senate race could have been the catalyst.  Independents/Other party registrations chugged along at a typical pace. This month’s performance of statewide gains can be attributed to the lowering of the D and R performance. 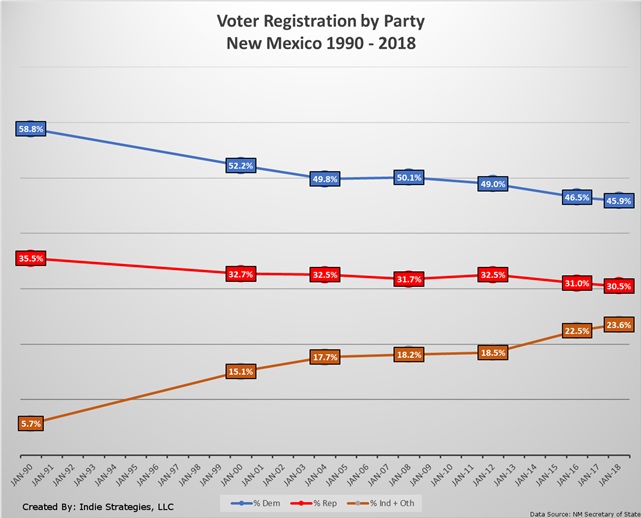 It is true that when a party has the larger share of registration, it takes more effort just to maintain it’s advantage.  Without sustained efforts though, the Democrat’s hold on the registration figures decline. The difference in performance between the July report and August is stark.  It has been my experience that Republicans do not put as much effort on registration as Democrats. That can add to their decline as well.  The overarching trend over the decades has been away from the two big parties, and the constant slow but steady changes in registration has accumulated enough to be more noticeable than ever. It doesn’t matter to Democrats much if they lose a point or two when they own over 55 percent, but now, sliding under 46 percent, it begins to be palpable.

It has been my experience that the older a voter is, the more attached to the Ds and Rs they are.  Figures are beginning to come out that younger voters are less inclined to register with a party, or at least the “Big 2”.  With older voters dying, and being replaced with non-D, non-R registrations, the swing over time could prove more drastic.

For now, we will check in each month and see what transpires. I predict a small uptick for Ds and Rs, as they register people ahead of the October 9th deadline. Your comments and ideas on why the “Big 2” registration figures keep sliding are welcome!

Steve Cabiedes has lived in Albuquerque for over forty years. He is the owner of Indie Strategies, a Political Consulting firm. Steve's journey has taken him to connect with people of many political philosophies. Steve lives with a passion for Geography, Music, Politics, Integrity, and Truth Telling.
2020 Elections, News, NM Legislature, Political Strategy