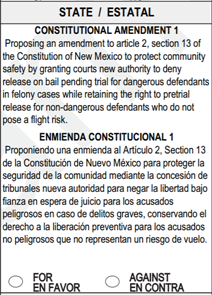 On November 8, New Mexicans will be deciding whether to amend Article 2, Section 13, of the New Mexico Constitution.  As the sample ballot reads, the amendment grants courts new authority to deny release on bail for danger defendants.  It also “retain[s] the right to pretrial release” for defendants who are neither dangerous, nor a flight risk. This article is the first of a series about the bail amendment leading up to the election.

The necessity for this amendment was due to a 2014 New Mexico Supreme Court case, State v. Walter Brown. The defendant, Walter Brown – who was charged with first degree murder – was held for years on a bail of $250,000.00, which was based on the “the nature and seriousness of the alleged offense.”  The case was a relatively simple: during an argument, he stabbed someone in the heart with a pocket knife.  But instead of being tried quickly, he was held in pretrial detention for nearly three years because he was indigent and could not afford to post the bond imposed.

After two years and four months of pretrial detention, he filed a motion to be released on nonmonetary conditions, where his counsel presented “uncontroverted” evidence at a hearing.  He had an IQ of 70 and was in special education for the majority of his years in public school.  He could not “live independently due to developmental and intellectual disabilities.” Yet in “spite of his disabilities, while in pretrial detention he successfully completed a variety of educational and counseling programs and obtained a high school diploma.”  The district court clinician evaluated him and testified “that Defendant was an appropriate candidate for release under the supervision of the pretrial services program with GPS monitoring.”  In other words, even though he was charged with first degree murder, the court found that he was neither a flight risk, nor a danger to the community.  But the court nonetheless kept his bond at $250,000 solely due to the nature and the seriousness of the offense.  The trouble is, under the Constitution of New Mexico, unless bond is withheld, all persons before conviction shall be bailable and excessive bail shall not be required.

In one of the more interesting opinions that traces the history of bail, the Supreme Court held that the New Mexican Constitution and “bail rules established a presumption of release by the least restrictive conditions and emphasize methods of pretrial release that do not require financial security.” While it may sound outrageous to some people that a defendant should be entitled to a reasonable bail, the principle is rather longstanding.  It was first enshrined into the written law of New Mexico when Brigadier General Stephen Kearny promulgated the Kearny Bill of Rights in 1846 with the assistance of Colonel A.W. Doniphan, who had made his way to New Mexico from Missouri during the Mexican-American War. With language derived from the Constitution of Missouri of 1820 and what is now Sections 20 and 21 of the Missouri Bill of Rights, Kearney wrote: “All persons shall be bailed by sufficient sureties, except in capital offenses where proof of guilt is evident…” and “Excessive bail shall not be required.”

Unfortunately, the constitutional prohibition from imposing excessive bail for non-capital offenses did not stop judges from doing so. This resulted in a lot of poor folks being held in custody who were neither dangerous nor flight risks. In Albuquerque, the Metropolitan Detention Center was always jam packed and is still under a consent decree. But then came Brown. “Intentionally setting bail so high as to be unattainable is simply a less honest method of unlawfully denying bail altogether,” Justice Charles Daniels wrote. Recently, it has been asserted that this ruling was a factor in the Metropolitan Detention Center being at the lowest population rates as it has been in years.

In 2016, the New Mexico legislature passed an amendment seeking to secure the language articulated in Brown. In line with Brown, courts are still prohibited from setting a bond too high if the defendant is neither a danger or a flight risk. But the amendment also grants courts of record a new power – one that was not the focal point of Brown.  Under the amendment, courts now have the power to deny bail if the defendant has been charged with any felony if the court deems the defendant to be dangerous or a flight risk.  Ironically, in 1992, Missouri amended its constitution to deny bail for dangerous offenders under its Crime Victims’ Rights Amendment. (“Notwithstanding section 20 of article I of this Constitution, upon a showing that the defendant poses a danger to a crime victim, the community, or any other person, the court may deny bail or may impose special conditions which the defendant and surety must guarantee.”)

Much can be said for the necessity to deny bail for certain persons. New Mexico – like the rest of the country – has seen a recent spike in violent crime. In 2015, murders rose 15.8% in New Mexico, compared to 10.8% nationwide.  According to the FBI, New Mexico ranks third worst state on violent crime, just behind Alaska and Nevada, and second worst for property crime.  “This is yet another reason legislators need to find the courage to get tough on crime and strengthen penalties against violent offenders,” wrote Martinez spokesman Michael Lonergan. But this was not the primary focal point of Brown.

Today Governor Martinez convened a special session to address New Mexico’s $600 million budget deficit. Tough-on-crime bills have also been introduced, to include a reinstatement of the death penalty and strengthening the “three-strikes” law. Needless to say, regardless of the outcome of this special session, the tough-on-crime agenda will be a focal point on the general election, both nationally and in New Mexico.

Milton Friedman once said: “One of the great mistakes is to judge policies and programs by their intentions rather than their results.” In the next few articles, I plan on writing arguments for and against the constitutional amendment, addressing what has happened to those other states – like New Jersey – that have recent undergone bail reform, and what I anticipate happening if the amendment passes.

Johnny Osborn, originally from Las Cruces, New Mexico, is a criminal defense attorney in Albuquerque, New Mexico. After graduating from the University of New Mexico School of Law in 2010, Johnny was a prosecutor for the State of New Mexico in Albuquerque, where he prosecuted all crimes to include violent first degree felonies. He enjoys camping and fly fishing in the northern New Mexico mountains, has an organic garden (from which he won first place in the green bean division at the New Mexico State Fair of 2016), and enjoys hanging out with his dog, Milton. He is a member of the New Mexico State Bar Historical Committee and is co-founder and Vice-President of Drug War Stories.
2020 Elections, News, NM Legislature, Political Strategy